A Day out in Paris

How can one ever decide what to do in Paris? There is so much to do, to see, to eat, to drink, to experience. How about something I have never done before, so I set out for the Luxembourg Gardens. I had read about it of course, it was designed for the children of Paris by one Napoleon so that piqued my interest. It also contains the first model of the Statue of Liberty, so well worth an explore. Not far from my hotel I found it easily enough but on arrival it became obvious that perhaps I had mistimed my visit, it’s December and very cold. Leafless trees, bare hedges, hardly a frolicking child in sight. Some of the statues were interesting, I did find one of Massenet, a famous composer, but never did find the Liberty. There were lots and lots of joggers, dangerous joggers, I had to dodge out of the way, stepping in puddles. Time to leave, can’t keep up with the competition.

A hike through the neighborhood up to Saint Germain des Pres. There is something magical about that, the name just sounds so romantic. Just try saying it, or is it just me. I walked along admiring famous restaurants, Les Deux Magots and Cafe Flore, thought about grabbing a snack but they looked a bit intimidating, not to mention expensive. Took lots of photos of the street signs to bore the folks back home, sat on a bench and took in the atmosphere, wondered what to do next. Well it has to be the Eiffel Tower clearly, I mean this is Paris, gotta do that.

(Back story here, the eldest son, Nat,was here with girlfriend Erin. I didn’t tell them I too was in town. Dear old dad crashing the party, no, I think not. So I was constantly aware that I should be incognito, hood up, shades on, looking around. Not necessarily on St Germain but certainly at the Tour.)

Bought a fresh baguette and cheese, loaded them into my shoulder bag and set off across the city to what is probably the most famous landmark in Paris. No, it definitely is. Through the streets crowded with weekend shoppers, lost tourists, late risers going for coffee and some for le brunch which seemed popular. Walked past Les Invalides, which seems to be French for The Army Museum, also Napoleon’s tomb. A fantastic building with a startling gold tower which really stands out among the rooftops, making a good route marker. A couple more blocks and there it was, the epitome of Paris in the distance at the end of an extremely long Park. Ignoring my complaining feet I set off down the gardens dodging dog walkers and selfie taking visitors. No matter how many times you see it, from whatever angle you see it there is just something about La Tour Eiffel. It just screams France, Paris, you are here, now, in Paris, and nowhere else on the planet. Like being on the Golden Gate Bridge or standing beneath Big Ben. Its one of those moments when you are just focused,in the moment and realize that you have made it, to Paris. Anyway, I found a bench underneath and ate my bread and cheese, not a tourist me! I was sure I would bump into Nat and Erin, so the hood was pulled well over my head and the shades were on tightly, I could just hear them saying ‘Dad, what are you doing here, eating bread and cheese and looking like a tourist?” (It didn’t happen) I checked out the queues for the elevators, gazed at the stairs up to the first level, not a chance, not with my aching feet. So was content to walk around the base, looking up. Tried for the arty photo along with the thousands of others, also looking for the arty shot. That was it really, just about one of the most recognisable places on Earth and off I went.

Yes, I did take a selfie but promise not to share! 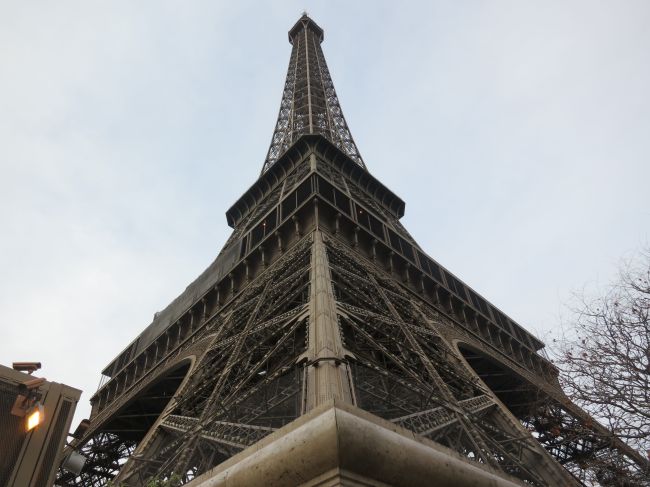 2 responses to “A Day out in Paris”