Now I have three people asking “What on earth are you doing in Uzbekistan?” or more specifically Samarkand. I will endeavor to elucidate. A long time ago, when at school, we were all compelled to read the works of James Elroy Flecker, not only a poet but also an alumni of the school. I won’t go into all the verses but the final two lines of The Golden Journey to Samarkand are: “Why men were born:but surely we are brave, Who make the Golden Journey to Samarkand.” Stirring stuff for the lad Tim, who I might add was frequently chastised for looking out of the window and day dreaming. There was also a roommate at Uni’ whose parents came here, so that was a long time ago also, and they invited me over to see their slides. I was hooked. Briefly then, those are a couple of  the reasons I always knew I would come here and why.

It is of course a staggeringly romantic place, the menfolk with their flowing robes and unique hats, the womenfolk in their national dress, remarkably colorful, the architecture and the history. It was almost sacked by Alexander the Great in 329BC, Genghis Khan took it over in 1340 and Tamerlaine made it his Capital in the 14th Century. There is so much history here that I find I cannot get enough and certainly not retain it all. Tamerlaine’s mausoleum, the Gur-E-Amir, which sits in its own park reached by climbing a set of steep stairs features one of the finest domes I have seen in the city. 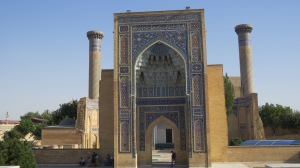 The Bibi-Khanym Mosque is quite breathtaking, vast on a similar scale as the Registan. 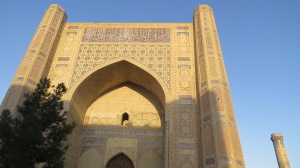 Perhaps my favorite of the many sites was The Shah-I-Zinda which is a collection of mausoleums created for Tamerlaine’s relations, favorites and Generals. It was quite a walk from my B and B and after walking through a park area I saw that my way was blocked by a four lane highway, I almost gave up. But then I spied a set of steps down to the road and approaching the bottom the traffic stopped, I had a green light, I crossed, mystified, then watching others discovered that the traffic lights were remotely controlled, clever that. 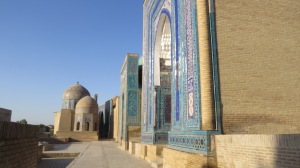 A view of the complex. 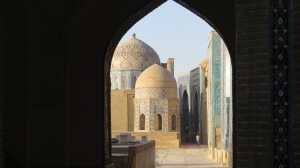 I liked this one.

I’m sorry but I really can’t do justice to this place, I don’t have the words and certainly not the photographic skills but note that it has been a dream come true, it is beyond words and impossible to convey artistically. I will let others try.

But now, something completely different. The Mongol Rally is in town. I met some of the entrants at the Uzbek Consulate in Istanbul applying for their visas. Quite crazy. For those who don’t know this is a car rally from London to Ulan Bator in Mongolia raising money for charity. Contestants come from all over the world, in fact there are two ladies from Wisconsin, driving a Volkswagon Golf,  Skyping back home on the next table. Hilarious. Interesting to see British car registration plates on the streets of Samarkand.

PS. Thanks to Ms Shubeau, Ms Garban and Sebastian for provoking the initial thoughts and I hope I have answered your questions, a bit.