The ruined fortresses in the desert.

With all these train rides, taxis and different cities and hotels obviously I meet people and then bump into them again, so here in Khiva I met up with Austin who had been staying at the Samarkand B and B and then with Oliver and Katya who I saw on the train to Bukhara and who then stayed at the same B and B in that city. Oliver, Katya and I went for (the now famous) lunch on Wednesday and wandering through the Bazaar afterwards met up with Austin. We had all heard of a collection of ruined fortresses north of here in the desert and agreed to go on a group outing the next day. We tried the tourist office first but the negotiation was difficult so we went to see a man who Austin had met and he agreed to take us for a reasonable price.

Up early on Thursday, the car came for me at 7.50 and we went round the corner to pick up the other three. I was nervous that Oliver would be uncomfortable in the back as he is six foot six, but no, he was fine in the back and off we went. Back through Urgench where my train had arrived and then north through cotton fields, rice paddies, salt flats, goat herds, corn fields. We stopped for water at a roadside shack where bathroom breaks were taken, reports of three cows guarding the outhouse. The scenery changed after about an hour from the green of the oasis to the brown of the dusty desert, fewer and fewer other cars on the road, mainly just donkey carts, people walking and and herds of cattle.

We came across the first ruin soon after entering the desert and pulled off the road onto a track for a couple of hundred yards, parked next to the only other car and all piled out. I paused to take photos but the others were off across the scrub, jumping over a muddy ditch and approached the main gateway. I followed, failed to jump the ditch and squelched into the mud, they pretended not to notice. I could see Katya running up the path into the fortress crying “and we invade the fortress”, this from a thirty something Stanford graduate from Moscow. I think we were all filled with a kind of child like enthusiasm. Austin bounded about, running from wall to wall, taking photos, Oliver beamed eagerly and I wondered how long I could keep this up, it was incredibly hot.

The second fortress was as breathtaking. The ancient capital of the region it was interesting to see the remains of houses, rooms, palaces, stables and storage areas. There were no guides at any of these ruins, no postcard sellers, no souvenir or trinket vendors, not much of anything really, just us, the vistas and the wind. The Wind of the Ages. I tried to take photos of the huge outer wall but it didn’t really work, too big and it was noon time so the light was terrible. But the ruins are still there. Our driver bought a melon, for lunch and we stopped at a roadside cafe after pausing at a lake, in the desert, full of fish apparently. Oliver ate a chicken, looked like a whole one, Katya had soup, Austin had some pastry things and I had a huge plate of stuffed dumplings called Manti. We then witnessed the melon cutting ritual which was quite delightful, it tasted good too, There are forty different varieties of melon available around here.

To the last ruined fortress which turned out to be two, close together. We parked adjacent to a collection (?) of yurts, real yurts, with people living in them and a small herd of camels. Great enthusiasm for camel riding from Austin and Oliver so they went off to negotiate a price and reappeared, on a camel. Katya didn’t seem too keen and I definitely wasn’t, but off they went up a long track to the fortress. A very long track. Katya lead the way and I followed, in my sandals, which kept filling up with sand, very hot sand. Up and up, on and on, we made it to the top. The views of the surrounding desert were stunning, such a huge expanse, and I could just imagine the dust cloud the inhabitants must have seen as the enemy came in from the horizon. I walked almost all the way round the fortress, took some photos of the second fort below and then cut across the interior, I was flagging, big time. Back down the long track, uncomfortable sand in sandals, blisters beginning, really really hot, one foot in front of the other, and I made it, bringing up the rear, again.

Tea in the yurt was never so welcome.

Here’s a couple of things: I didn’t go into the history of the fortresses too much as its all available a click away on Google. I gave you the names, so if you are interested, click away.

All three of my outing friends have left town, Oliver and Katya to Moscow (a direct flight!) and Austin back to Tashkent. Thanks guys for a memorable day out. So I’m feeling a bit lonesome and will head out tomorrow. Lets see how that goes.

A view of the inside of Kyzyl-Kala.

Is someone still keeping watch for marauders?

Toprak-Kala, the ancient capital of the area dating from 1st to 5th century.

Someone’s house two an half thousand years ago.

First view of the Ayaz-Kala, built at the end of 4th Century BC.

The front door or gateway into the fortress. It was very well defended against raids by nomads. 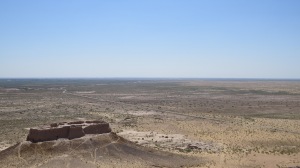 Ayaz-Kala 2, built 6th to 8th Century and lasted until the Mongol invasion in the 13th Century. Taken from Ayaz-Kala 1. 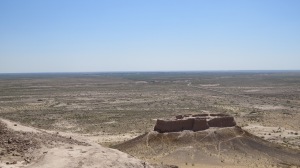 Another one of #2, and look at that view. 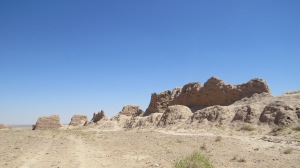 Maybe you share my affection for walls. I love walls!

Last view of fortress from doorway of a yurt.

10 responses to “The ruined fortresses in the desert.”