All Sunday afternoon activities have come to a sudden halt, the heavens have opened, its pouring with rain and everyone has either gone home or is sheltering in a restaurant. That’s the problem here in Kota Kinabalu, there is constantly so much to do, and everyone is out doing it, whether it be eating or snacking at the endless cafes and restaurants, shopping at the many, many markets, admiring the view over the South China Sea or just hanging out, the choices are endless. Hence, a rather long interval since the last blog entry, sorry.

I have done some of the required touristy things, which as a newcomer I suppose I must do and the first was a ride on the North Borneo Railway. Left behind by the British it runs down the coast for about thirty miles and is powered by a steam locomotive built in England in the 1950s. Breakfast was provided on arrival in one of the original refurbished railway carriages and was served by people in contemporary dress, sure a bit corny, but not too tacky. Chuffing through the jungle was a good introduction to Borneo, the World’s third largest island, and only motivated me to go explore some more. I got to ride in the cab for a little while, no nanny state here! We reached the end of the line, the locomotive spun round on a turntable, re connected, and off we went again. Lunch, served in Tiffin cans, again a bit corny but wildly practical. A Tiffin can is a kind of lunch box, but much more exotic and in widespread use, here, there and all over India, especially. Other passengers included Brits, obviously, Germans, French, a Hungarian lady and two Americans, one from Detroit even and that was just my carriage. OK it was a train ride and I really like trains but it was just a little bit over the top, just a little, though you would have to be an arch cynic to decry it.

There is a splendid lady, Nora, who runs the reception desk at my hotel, always full of ideas and places to go. Next then was an Orangutan rehabilitation center. (note: orang-utan, orangutang or orang-utang) Set in the grounds of the very, very up market Shangri La Hotel about forty five minutes out of town it was a bit of an expensive taxi ride there and back and as an introduction to the wildlife wonders of Borneo it worked. Of course I got totally lost amongst the lavishness of the hotel, gazing around rather overwhelmed at the opulence and had to return to reception for a map, no, there were no signposts. There was a patriotic video to start things off, highlights included the fact that ten percent of the world’s orchids are to be found on the local mountain ( Mt Kinabalu) and that there is more bio diversity to be found in one square mile of the Borneo rain forest than in all of North America and Europe combined. All right then. Off on a steep path into the rain forest until we came to a wooden deck, three levels, with a small platform about twenty feet away. The excitement built as we observed branches moving high in the canopy and then, there they were, two young male Orangs not twenty feet away. Cameras whirred and clicked, iPads blocked the view (again), children cried, not sure why, some just stood and gazed, I know I did because, not being a pushy kind, I was relegated to the back. The Orangs ate and interest dwindled, people sauntered away and I could finally take a photo or two.

It wasn’t the greatest experience but a great intro and tomorrow I am off to a wildlife reserve about six hours on the bus away. I’ll let you know how it goes.

You are never far from the sea in KK and wandering around it flashes into view at the end of the street from time to time. Next then was to get out on to the water. I took a boat ride to one of the many islands lying off shore. You know me, on a speed boat bouncing over the waves, the light shimmering on the water, the view changing constantly, the colors, the wind, yep, heaven. It was just the six of us on the island, there was diving, canoeing, snorkeling etc available but I was content just to sit on the sand and look around. It was fairly hot but interestingly because of the position, five degrees north of the equator I could feel myself burning after a few minutes despite a liberal slathering of sunscreen and spent considerable time in the shade.

Talking of geography, I watched the sunset one evening and realized after it had set that forty-five minutes later that same sun rose, in Seattle. Mind boggling. 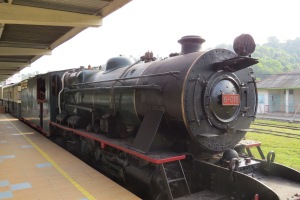 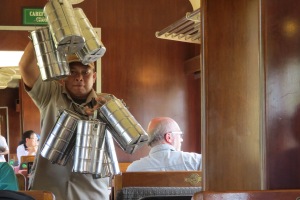 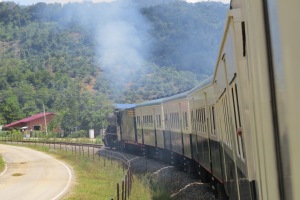 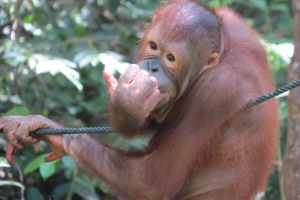