Looking at a clean page and wondering how to explain Maratua and I have no idea where to begin. How about the beginning? I was in Samarinda after the river trip and at dinner there was a young woman on the next table with multiple phones, gabbing away in foreign on one, then in highly accented English English on another, intrigued I struck up a conversation over the rice and chicken. Seems she was the sustainability manager for a palm oil company (huh, good luck with that I didn’t say) and out of the blue she starts showing me photos on her computer of a small coconut treed beach with the whitest sand. “You must go to Maratua” she said and went on her way. Back then to Balikpapan on the Kangaroo Bus, yes really, and to the hotel where, next morning at breakfast was a Swiss family. Mom, Dad, eleven year old girl, boy seven and we got to chatting. They had arrived in the middle of the night from Zurich, bright and sparkling, no grizzly jet lag, with just layovers here and there on the way. I complimented them on their sparkliness. “Oh thanks says the Dad, we are leaving in two hours for Maratua”, as if that explained everything.

You can imagine, all my antennas went onto ‘receive’ and I heard the story. First you must get a ninety minute flight to Berau, then find a car and driver for the two hour plus ride to Tanjung Batu, and after that you must find a speedboat and captain for the two hour plus trip out to the island. They left and out came the computer. A couple of expensive diving resorts on Booking.com, nothing on Agoda but then Trip Advisor had these reviews of a guesthouse, all five stars but no way to book. Checked the guest house web site and the only way to book was through a random lady called Amelia who was somewhere, New Zealand as it turned out. Back and forth with the emails, pages and pages of instructions and guidance, helpful hints and guidance, all this for a guest house (?), and pay upfront with PayPal. I took the leap, paid, booked the flight and next morning, early, I was on my way.

The flight was typically uneventful, Berau airport equally unremarkable, found a car and driver who straight away started asking me questions, the indication was that he wanted to stop off somewhere for something, well sure I shrugged. We stopped outside a house, he beeped and three teenage girls fell, giggling into the back, and off we went. Terrible road, full of holes, half washed away in places with no signage of imminent catastrophe, the occasional stop for yet more bananas, some nice Rain Forest bits, other bits devastated by slash and burn, heartbreaking charred remains. The jetty at Tanjung Batu all of a sudden, fishing boats, yachts yachting in the bay, some very expensive looking speed boats, some others, not so much. The car was approached by a team of rum looking coves and negotiations began, fortunately the aforementioned Amelia had given guidance on how much to pay and when I got a few dollars under her suggested price the deal was clinched. I bid farewell to my fellow passengers who all did the hand shake and touch the clasped hands to their forehead thing. All the young people do that, it’s most delightful. Embarked into one of the less expensive looking boats, bags followed, I sat in the back and we rocketed off, straight out to sea.

I felt bad for the next couple of hours because for the first time on my trip I was almost glad that certain family members were not present. It wasn’t really a rough sea but every time we hit a wave we basically took off, me two feet up in the air landing heavily back down again. I tried moving into the front seat behind the miniscule windshield, it didn’t help much. Out of sight of land for a while there was eventually a dot then a blob and Maratua loomed. (Finally Tim, finally!) and we approached the beach with the small blue roofed guest house beckoning. A large gentleman, Jun, took my bags off down a boardwalk into the jungle to my little hut with an outside bathroom, a big water tank collecting rainwater for showers etc. A bed and mozzie net, open around the top of the walls which let in the bugs and beasties, some quite large. The blue roofed large hut was the restaurant/bar, I use bar loosely, beer only. There was a kitchen that after a few days I felt comfortable helping myself from, tea, Sprite etc. There were omelets or scrambled eggs for breakfast, toast even, rice and fish or chicken for dinner, curried, spiced or not. Very good considering how far we were from anywhere. There were some others around, not many and they all left until it was just me, a guy from Minnesota, Thano, on his way to his job in McMurdo Sound Antarctica and Meredith from South Dakota on her way home from two years of Peace Corps teaching in Thailand. We were soon joined by Ola and Mattius from Poland who added a little continental je ne sais quoi to our small American enclave. Conversations, meals, beers and good company made our little bit of Paradise even better. It was almost Robinson Crusoe land, a coral island, an atoll in fact, complete with reef and lagoon.

There was a surfeit of divers around, scuba types, I couldn’t keep up with their special language which consisted of discussions based around PADIs, BCDs and REGs, I had no idea, but did enjoy the forays into the encyclopedia of local fish. There are a lot of fish in the book. I did tag along on one excursion to a Dive Resort, Nabucco, set on its own tiny island, no more than ten chalets, a private beach and scrambled egg with bacon for breakfast. It looked very, very pleasant, a little expensive perhaps and absolutely nothing to do except for the diving. That’s why people go there. Oh, and I missed the Swiss family by two hours.

There was another outing one evening to the nearest village for a wedding. The whole population was there on the dusty main street, under a large canopy, sitting on chairs or on the verandas of the adjoining houses. There was a band on stage at one end with the happy couple sitting on thrones beside the speakers and they looked absolutely miserable. They must have been there all day, all dressed up in their finery, but to my eye the bride’s dress bore every resemblance to a multi colored meringue. I sat myself down at the back, as you do, and thought I would just stay incognito but oh no, the Headman of the village comes along, grabs my hand a marched me right to the front where I was placed on a junior throne. Not quite what I had in mind, nor I think what Ola and Meredith had in mind either when they were hauled up on stage and encouraged to dance. They did very well. I was not invited to participate!

I’m probably not doing Maratua the justice it deserves because the atmosphere of the place is just about impossible to describe in words. The little restaurant overlooked the sea and every morning we would see turtles feeding right below us. There were Marlins out at sea doing that strange walk on the surface they do on their tales, Trumpet fish swam lazily by, there were barracudas, sharks and Napoleon fish, a whole encyclopedia full of fish in fact. And I did swim and snorkel with the turtles so that’s another thing knocked off the bucket list. The days absolutely flew by but all I did all day was sit on the restaurant edge and scan the one hundred and eighty degree sea view back and forth, back and forth to see what could be seen, read my book, point something out to the others or follow their pointed fingers and watch the tide go in and out. It was all just delicious. The owner, Jun, was a big local type, his wife Anna was quite wonderful and their four month old baby cried once, once! As it happens Jun lived in Edinburgh (Stockbridge) for three and a half years and has a kilt. We talked about the weather there. He didn’t wear his kilt. But on a similar subject I was thumbing through the magazines and came across a Nat’ Geo’ from last year with a big feature on the stone circles etc of Orkney. The Standing Stones of Stenness on the cover. All that way to Maratua to find an article about Orkney, who’d have thought?

There were many ‘moments’, one of the better ones was when I dropped my wallet in the sea. I quickly grabbed it and laid out my notes on a towel to dry. The sight of me chasing five dollar bills down the beach went, sadly, unrecorded. Or trying to Skype back home which involved a scooter ride to the village and connecting under the only cell tower on the island, much to the amusement of the population. etc etc.

Then it was time to leave, how sad. If you think you might go, go soon, they are building an airport. 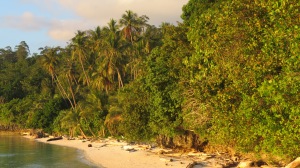 Part of the beach. 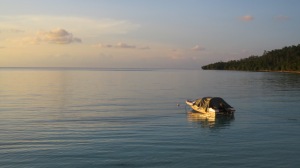 The cats caught a snake.

That golden moment, with Mattius and parts of Ola.

Anna and the delightful baby.

This post may need a bit of editing, apologies, but thought I would upload it as the connection in North Sulawesi is spotty at best.

This entry was posted in Kalimantan, Maratua and tagged Maratua. Bookmark the permalink.