At last I have caught up with my blogs and I’m sitting in my small Plazuela de Pozo in Cartagena, Colombia. It is sunset and the colors are amplified many times over, the yellows are like gold and the reds almost seem to move. The flowers are all having a last burst for the day and the birds are swooping around the sky. The church bells are ringing up the street at the Iglesia de la Trinidad and the small boats on the river are heading home for the night. The tourist buses have stopped running and the backpackers are enjoying their first beer of the evening. Restaurant owners are setting up tables on the sidewalk, others are sweeping up the remains of lunch or writing up the chalk boards for this evening’s fare. The carpentry shop next door to my hotel has switched off the electric saws, finally, and the coffee sellers are plying their trade with the artisans. Three streets away I can see the usual rush hour gridlock but my little Plazuela is like an oasis. People stop to photograph the murals while others sit among the street art sculptures enjoying the peace and quiet.

Everything about the city exuded its rich history, every turn was a new treat. The city was attacked and destroyed frequently by pirates, both Drake and Hawkins laid siege to the walls but failed to destroy it. There was a famous battle, the Battle of Cartagena, in 1741 during the War of Jenkin’s Ear (true) that ended because it was raining too much (also true) The treasure galleons loaded up their gold and silver here before setting sail for Spain. In the center of the walled city is a massive fortress, Castillo San Philipe de Barajas, built by the Spanish, it took them two hundred years to complete and was never penetrated. There is a fine Cathedral and a somewhat gloomy Palace of the Inquisition.

The Old City is quite the tourist attraction with original colonial architecture featuring overhanging balconies drenched in flowers. Endless tourist shops and lots of glitz but a good place for a wander. The hotels around the old part are mostly upscale and I found myself in the Getsemani area that turned out to be the oldest part of the City and not touristy at all. Kids playing football in the streets, bands playing on corners, inexpensive restaurants and cafes where I could linger for a while without being hassled to buy more.

I don’t know why I am having such a difficult time describing Cartagena. I have sat in front of this page for days, weeks even and I can’t do the place justice. Maybe the photos will help or maybe I should try and write about somewhere else. It’s a fact though, I was more sad (sadder?) to leave Cartagena than many other places I have visited lately, and there have been a few.

PS. The first line is clearly redundant but I thought I would leave it in.

My little square. Look closely for the artworks. 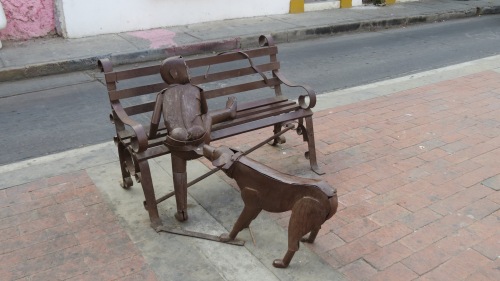 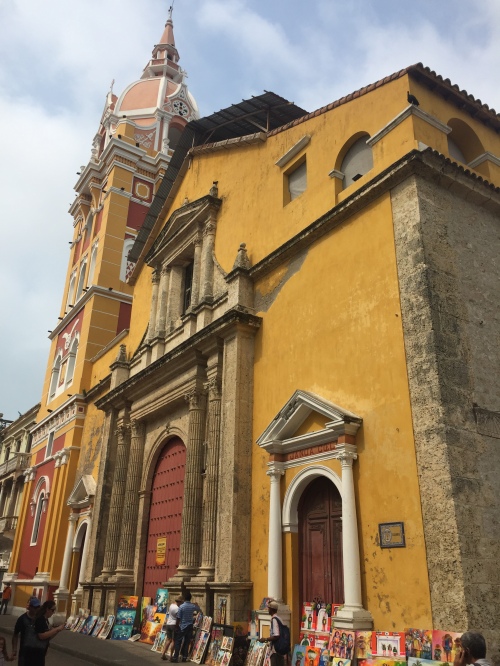 A part of the fortress.

The wall is very imposing.