Back to the blog after a bit of an absence, sorry about that. Where did I leave off? Was it Cartagena? What an absolutely great city that is, I can recommend to one and all and now that the five decade civil war is over its probably safe even for alarmists. Thinking back, quite a few months, I had to leave Colombia before I really wanted to and ended up in Panama City which was not, shall we say, edifying. High rises, office blocks, poisoned beaches, a canal and hats. I did write a blog about it didn’t I. The buzz in Cartagena and in Panama was that the San Blas or Kuna Yala islands off the North Coast are definitely worth a visit because nobody knows about them, nobody goes there and there is nothing to do if you go, nowhere to stay, basic food, no potable water, no loos, so yes, pretty much nothing, just the local people, the Kuna Tribe.

Another of those half past dark starts at 4.30am, run around the smaller hotels and hostels picking people up until the van filled up and off to a giant supermarket to buy, erm, what? I wandered around, bought a bottle of water, some cookies and a sandwich and went back to the van. Where did everybody go? I waited and waited until my van mates returned with cartloads of stuff. Huge water containers, industrial size serials, bread, cheese, just the basics and I figured they were going to be on a deserted island for just a few days. As a ‘more mature’ backpacker (ha!) I had made other arrangements. I had found a boat chartering person, just him and his computer, and he found me a Polish guy, with a boat and no guests, who would knock 50% off his normal rate for a quick sail around the islands for a couple of nights.

I can’t say more than that the buzz was correct. There was nothing to do, but for just a couple of days I lived in a dream. Perfect coral islands, atolls, turquoise, warm sea, palm trees, women of the local tribe, few if any men, (the women do everything such as it is). Actually what the women do is make their very unique clothes with panels sown on called Molas and they sell the ones they don’t wear to tourists like me. This seems to be their sole source of income. Interestingly there was little or no food readily available. We were behind a giant reef and with two fishing rods dragging behind we never caught a thing. We did manage to buy a couple of somewhat meagre specimens but they didn’t really satisfy. The whole area is ‘fished out’. Depressing. One last thing, the larger Kuna villages are on the mainland and the women take it in turns to go live on the tiny islands, so the two women I met were on their tiny island for three months then they would return to the village and two more women would go stay. And I do mean tiny, I walked all the way around it in ten minutes.

From San Blas I made my way to Bocas del Torro, another group of islands at the other end of the Atlantic side of Panama right up near the border with Costa Rica. This archipelago couldn’t have been more different to San Blas. All the overlanders from the North making their way down through Mexico, Guatemala, Nicaragua and Costa Rica to South America seem to land on Bocas, ditto the overlanders making their way North from the South, it was as a result, crowded. It had the feel of a Wild West movie, as in anything goes, and nobody seemed to care about themselves or anyone else. Certainly there are some quite beautiful parts but it all felt like a low end resort for travellers, cheap booze, cheap and quite nasty food and tacky accommodations.

Additionally the rainy season was just beginning so I began to panic that my medium term plan, to travel North, overland, through Costa Rica, Guatemala and Nicaragua would just be a soggy mess. I don’t mind a bit of rain but the rainy season down there is something to behold. It is really very, very wet.

I needed a miracle and naturally one occurred! Yes really. I was sitting in my hotel room watching the rain come down and thought “well it can’t be raining everywhere” and started looking at hotels etc on Caribbean Islands. Mostly far, far above my pay grade and honestly the thought of an all-inclusive resort where you are not encouraged to venture out of the compound rather destroys the whole point of travelling. Hmm, how about Airbnb? Search, search and suddenly there she was. Someone I knew with an Airbnb in Jamaica. Small world. Sent off the requisite email and 24 hours later I was driving up her driveway.

It all worked out very well.

A display of molas 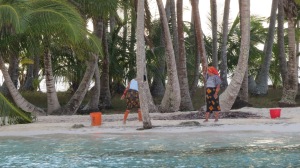 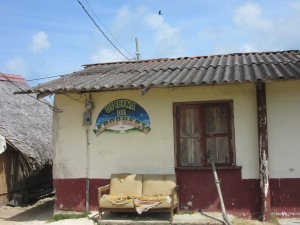 Sunset in the San Blas Islands. 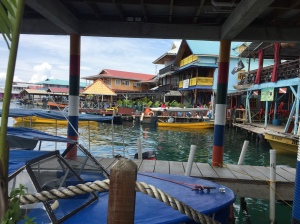 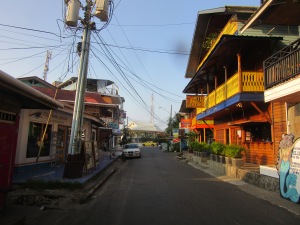