The Road to Moynaq.

Sometimes things don’t work out quite as planned but then again occasionally the gods are on my side and serendipity takes over. I was having breakfast chatting with the BnB owner in Khiva about border crossings into Turkmenistan. He mentioned that the crossing from Nukus, about four hours North, was the easiest and said he would go and investigate how much it would cost for me to get there. Meanwhile a German man joined the table and as usual the questions began with ‘Where are you from’ and ‘Where are you going.” He replied Nukus but was a little sad because his wife, Julia, was sick and didn’t want to go on to Muynak. Within minutes I had booked a hotel for one night pre border crossing, arranged a car for the three of us to Nukus to drop off Julia at the hotel before Engin and I set off for Muynak. What is this Muynak I hear you ask, actually you may know, but I will come to that.

Another two days in Khiva and early on Saturday morning the taxi came to pick us up and we drove out through the city wall’s big South Gate and headed through the oasis to Urgench before turning North. We crossed over the big river that provides the irrigation for this fertile spot, the Amu Darya, through cotton fields, maize and other cash crops (melons) until the green gave way to the browns of the Karakum Desert. Not the greatest roads but here and there were long, smooth and straight sections being built by, yes; you guessed it, the Chinese. An uneventful journey except for the peculiar ritual of being required to get out of the car outside the gas stations and wait with all the other car passengers before being picked up when the refill was completed. Arriving in Nukus we determined that there were two hotels in town with exactly the same name and of course we went to the wrong one first. Then on arriving at the correct one we found that Engin and Julia were booked into a yurt that poorly, sick Julia was not wild about. We sorted out a room for her from the compassionate reception desk person and leaving Julia to her restful day Engin and I got back in the car.

Another uneventful drive of about three hours that added to the three hour journey from Khiva to Nukus made for something of endurance, but it’s the price you have to pay. The landscape was flat, scrub covered and not green at all for the last fifty miles before Muynak but we finally arrived and there they were just as predicted. Peering over what used to be the cliffs of the Aral Sea we could see the marooned fishing fleet of Muynak below left high and dry years ago as the Sea waters receded. It was one of the saddest things I have ever seen. Back in the 1960s when Uzbekistan was a part of the Soviet Union some genius in the Politburo decided that it would help the country’s economy if the rivers, the Amu Darya and Syr Darya, flowing into the Aral Sea were diverted to enable cotton, rice and melon growing in the Karakum Desert. Once one of the world’s four largest lakes it is now only 10% of its former size. The remaining body of water is highly saline and the fish can no longer live in it. Moynaq was a thriving fishing town but when the water receded the fishing industry died and the population mostly left for other parts of Uzbekistan. The Sea shore is now one hundred miles away from Moynaq. Today it almost resembles a ghost town and the residents suffer from diseases caused by the frequent toxic dust storms. The Aral Sea disaster has become known as one of the major man made ecological disasters of all time. Of course the Soviet scientists and academics warned their Government of the likely outcome of their decision but were publicly ridiculed and ignored. Hmm, that sounds rather familiar. 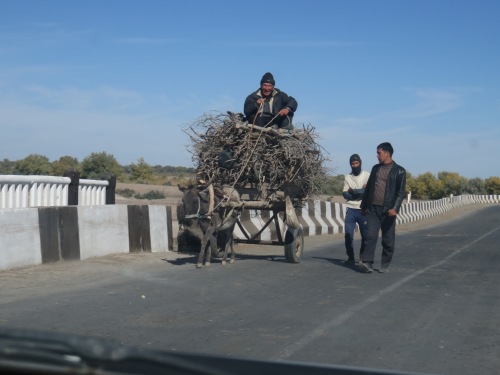 Migrating birds heading south. Can anyone identify them? 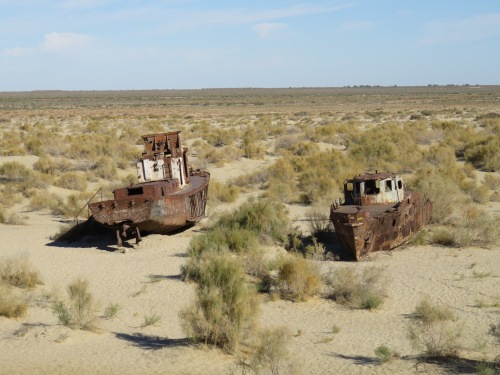 Just think, this was someone’s livelihood. 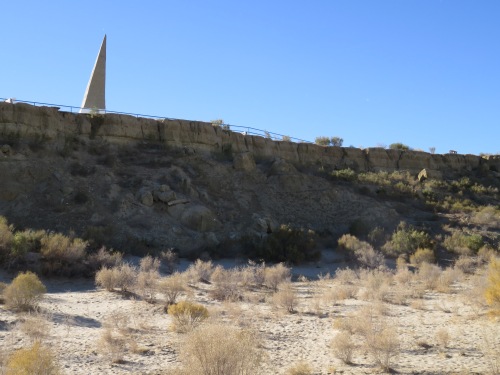 The cliffs of the Aral sea where the waves will crash no more due to Government stupidity. 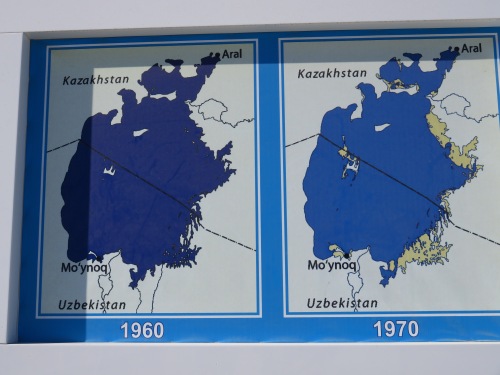 The Aral Sea that was.

The Aral Sea that is.

Behind me is the extent of the disaster stretching to the horizon and beyond. 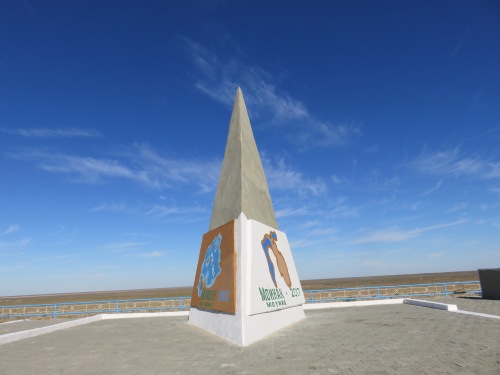 The memorial to a lost Sea.