A Trip to Tbilisi.

Georgia in the South Caucasus is a country I was only just aware of,, but after meeting someone, only one, who had been there it seemed a place I should visit. A young woman, Haibin Zhang from Beijing, travelled on her own through each of the Caucasus countries, Georgia, Armenia and Azerbaijan and had no qualms about safety; in fact she was very enthusiastic. From Turkey, where I left you last, there was a bus from Trabzon to Batumi and early one morning I boarded and set off for the border. Although the bus indicated that it was going to Batumi it in fact didn’t, it only went as far as the border where we were all removed into the noontime heat and joined the massive line (queue) to cross into Georgia. It was fairly gruesome, as the crowd had no idea of an orderly line and burly border guards with long sticks tried to keep everyone from spilling into the parking area. That took about four hours. It was horrible. Then the usual arrival in a new country routine of changing money and finding a way into the nearest town. Accomplished that and found a taxi to my hotel where my room was on the 8th floor and no elevator (lift). It wasn’t a very good day!

I was warned about Batumi and the warnings were correct. It is one of those Russian Black Sea resorts that one hears about and I resolved to leave as soon as I could find a way out. There is a very fine train from Batumi to Tbilisi, the capital city, and for just a few dollars I went on my way. Dropped off at my hotel in a sort of alley I looked around for reception but there was only an elevator with indications that I should go to the 4th floor. Up I went to be greeted by Khatia and Sofia who seemed to run the place in a very efficient and friendly fashion. My room had a balcony with views over the old city; floodlit churches perched on crags and an old castle. What more could I ask for, there was even a wine shop on the ground floor!

I really took to Tbilisi, its one of those cities where if you stop to look at the map people come up and offer to help, even if their English is not great. Did you know that Georgia was the first country in the world to convert to Christianity? Neither did I. The food is rather unique and with respect for vegetarians who might read this I won’t go into some of the more popular dishes but the National Dish is Khachapuri Adjaruli. A canoe shaped loaf of bread about a foot long and two inches thick arrives from what appears to be a tandoori oven or tone (with an accent on the E) filled with melted cheese, bubbling, then butter is added and an egg is broken into the middle of the sizzling mass. You eat it by dipping the crust into the goop and try not to think of your lactose intolerant friends. It was just delightful to see children racing home from the bakery with their big bag of canoes in time for dinner.

I’ll mention the wine but should write a whole chapter on it. There was wine making in Georgia in the Neolithic age 8,000 years ago and the quality has been improving ever since. I have read that before tourism the Georgian Immigration officer would stamp your passport and give you a bottle of wine; this is no longer the case, at the Turkish border anyway. Everywhere you go there is wine, you can even have it for breakfast. Sweet wine is popular as is orange wine but I stuck to a very robust dry red and enjoyed every evening.

My last blog was rather long so I will stop here and try to write again on my excursions in the country. There is a lot to see even if some of the sites are hard to pronounce. I’m thinking of Mtskheta for instance… 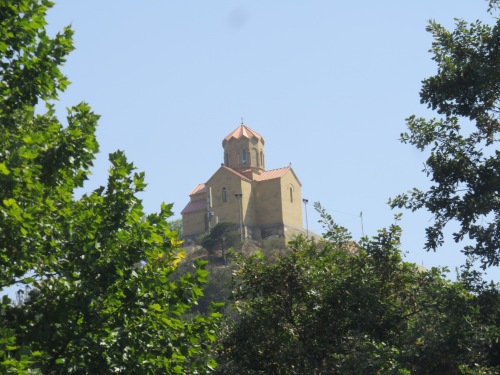 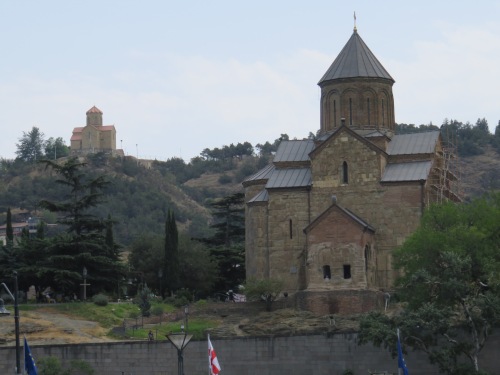 And yes, I rode the aerial tramway to the top.

The famous clock outside the equally famous marionette theatre in Tbilisi. 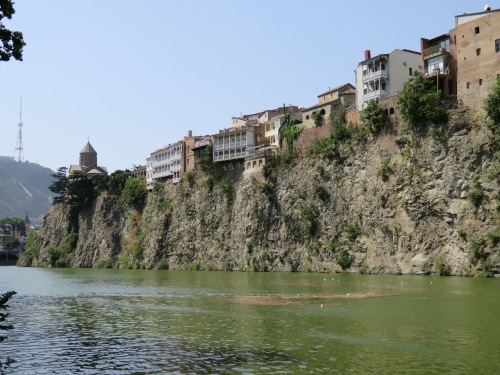