A whirlwind visit to Turkmenistan because that is all that my visa permitted. My Letter of Invitation arrived in my email inbox and as instructed I was at the border at 9.00am almost convinced that something would go wrong and I would have to return to Khiva. As I arrived a large bus unloaded a group of tourists and I joined the line behind all of them feeling that already things were going awry. Sure enough the process took an inordinately long time, as most of the tourists had not filled in their forms correctly. Eventually my turn came and I ate humble pie, my forms were wrong too. Endless passport stamping and photos taken and I went out only to find that the group ahead of me was stopped for “rest room breaks.” I got ahead arriving at the Turkmenistan side watched with some incredulity as the Turkmen bureaucracy lumbered into life. No less than four hand written forms were generated on the spot and I was instructed to carry them to the payment station across the room were more forms were generated and eventually I had a visa in my passport. Walking nervously toward the customs officials, all eight of them, a young man asked me if I knew anything about computers! Say what? There I was at the Turkmenistan border fixing Customs and Immigration computers, funny old world. The reward for my efforts was a very cursory glance at my bags and I was out and away to find Mr Ishan waiting for me and off we went.

The first stop, in Turkmenistan, was outside a city called Koneurgench and consisted of three interesting looking sites but I had no idea what I was looking at. Mr Ishan, though friendly enough, couldn’t tell me, I had no cell phone reception, and there was no sign of a shop selling guidebooks or even trinkets and postcards. He indicated that we would be there for three hours at which point I protested slightly in best mime. He handed me his phone and there was a heavily accented English accent asking me what was the matter. The situation got cleared up and I negotiated just a half hour at the Tyurabek Hanum, Solton Tekesh and the Gutlug Timur Minaret historical site. Walking around trying to work out what I was seeing I stopped under a tree and noticed a group of women doing ‘something,’ which consisted of putting their hands near the roots of the tree and then walking around it touching all the branches within reach. Odd I thought, are they Animists here. Then again in the middle of a very large adjacent field there was a woman obviously praying. Praying is fine but I have never seen it performed in the middle of a field. Have I led a sheltered life? I now know that the Gutlug Timur Minaret was, in 1330, the tallest building in the world and is all that is left of the ancient city of Gurganj. It was sacked by both Genghis Khan and Tamerlane after which the inhabitants, any that remained alive, moved away and it was abandoned.

Such was my introduction to Turkmenistan.

Mr Ishan and I sped off down the rather rough road and after a while he seemed to be getting tired and making mistakes which caused some anxiety. He failed to obey the speed limit at least twice and was pulled aside by the police immediately. The police, ha, the police in Turkmenistan, they are everywhere, there is a joke there “see a tree see a policeman, see two trees see two policemen.” If you are caught taking a photo of one you are liable to end up in jail. Mr Ishan avoided any serious trouble by simply bribing the officers to let us go on our way, $10 in local money seemed to do the trick. He was on his phone continuously, which I found mystifying until we came to the large city of Dashoguz, the second largest in the country, where things became clearer. We stopped at a supermarket for supplies and met up with his brother who had brought two tourists from the border outside Khiva, two New Zealanders, we chatted and bought supplies as instructed. Chocolate, biscuits, wine, vodka, you know, all the major food groups and roared away in convoy.

A couple more hours through cotton fields and what I took to be rice but Mr Ishan wasn’t too forthcoming until another stop for melons. The brother announced that this was the last stop before the desert so the lady Kiwi went to the loo, and returning looked grossed out demanding antiseptic wipes! Sure enough we were immediately in the desert, the Karakum, there were dunes, there were these odd looking square things beside the road to prevent the sand inundating the pavement, and there were goats, sheep and camels, lots of camels. Lots of photo opportunities except that the road was terrible, not just the occasional pothole, the whole road was a pothole which made taking photos impossible. To avoid the usual pothole experience of slowly sinking a wheel into the hole and then coming up the other side, we went faster, much faster, about 80-85 MPH and virtually flew over the pot holes swerving to avoid the deeper ruts and speeding along on the wrong side of the road. The noise was incredible as Mr Ishan battled with the wheel and I tried to be nonchalant and read a book. That didn’t last long! There is suitable metaphor somewhere that I can’t come up with, is it about peas or a can? He did slow down occasionally so I could take a photo of camels but that meant we fell behind the brother so we had to go even faster to catch up. It was all a rather cacophonous, roaring blur which went on and on for over a hundred miles. But we had a goal and needed to get there, so fast we went; I did see some Europeans driving along and enjoying the usual pothole experience at about 25 MPH. Oh, and did I mention the dust cloud we kicked up?

Finally our little convoy slowed and we turned off the road onto a desert track, engaged 4-wheel drive and ground out into the desert proper. After a few miles there was our destination, The Darvasa Gas Crater more popularly known as ‘The Door to Hell.’ Back in 1971 The Russians were drilling for natural gas in the Karakum and found a vast reserve of methane gas, which started leaking, and killing the local wildlife. It was decided that the remedy was to be a process called ‘flaring,’ basically just set fire to it until the leak stopped. It never has. The result is this enormous crater in the wastes of the desert that is on fire, flames, heat and a curious popping and crackling sound. It is really quite eerie. The brothers Ishan went off to pitch our camp leaving the three of us to gape and exclaim, take photos, pose as if warming our hands, etc etc. As darkness fell we were picked up, taken to camp, introduced to our tents, fed and watered and taken back to the crater. The nighttime crater experience was even more dramatic as the flames light up the desert night and the noises seemed louder. Taking photos was difficult because of the size and of course the darkness, I wasn’t very successful. Then the same group of tourists I had met at the border crossing surrounded us and it just wasn’t the same anymore. Our isolation was broken. There is only so much looking you can do at a gas flaming crater in the middle of the desert so we went back to our camp where the vodka was broken out. It had got quite cold; I was wearing my coat and gloves so the vodka was quite warming. However, these guys, the brothers Ishan and another guide who showed up with a group of Argentineans, were built like linebackers (rugby second row forwards) who seemed determined to make a night of it. No way was I going to keep up with three Russian-speaking giants so I went to bed and fell asleep to the sounds of the Door to Hell.

The ladies and the magic tree which apparently has healing properties. 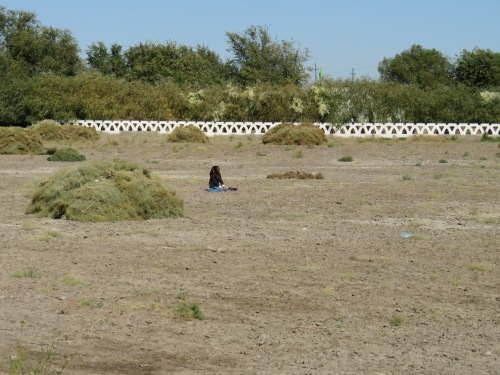 Prayers in a field. 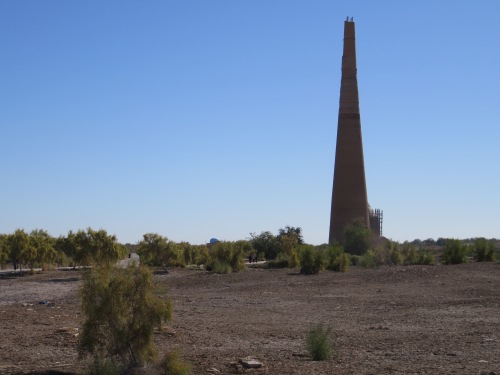 Gutlug Timur Minaret. The tallest building in the world in 1330. Spared by Genghis Khan and Tamerlane who both were impressed with its size. 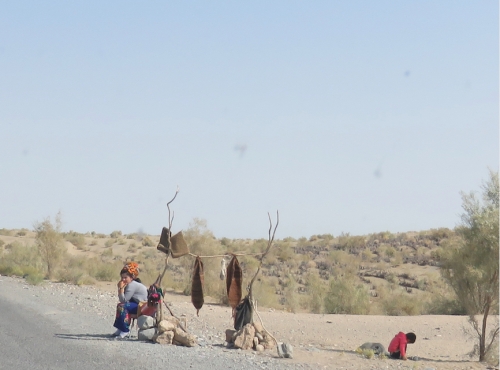 A very small stall in the desert.

This is a blurry photo of the strange square things that were beside the road throughout the desert to stop sand encroachment. They seem to made of upright twigs. Anyone know? 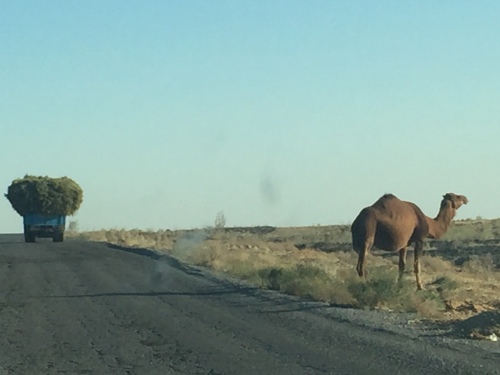 Camel and camel fodder truck for the winter. 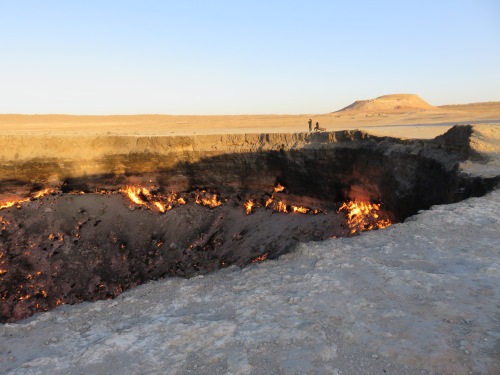 The Door to Hell, with New Zealanders. 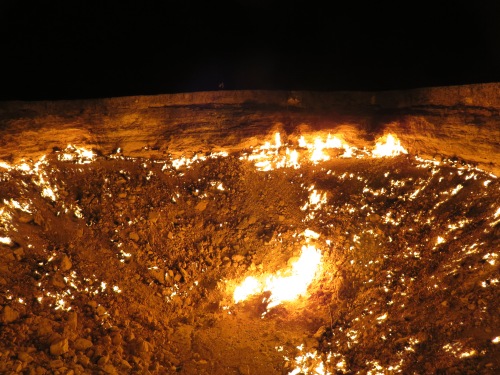 The crater at night.