My son commented that Ashgabat was a strange place to select for a vacation and I have to agree. It was with some relief that I climbed into Vladimir’s car the next morning and we hastened out of the city back out into the Karakum Desert. The foothills on our right marked the Iranian Border and of course they have built a wall between them. We stopped, somewhere, about 10 miles from the City and Vladimir managed to communicate to me that this was a cemetery and that at weekends it was a popular picnic spot, he showed me the ranks of BBQ pits and tables. People come to commune with their relatives who are buried there, or to prepare the recently deceased for burial. In fact there were some of the recently deceased in an area of ancient monuments and the like, covered with mats. I don’t know how long they were left there before burial. Again as with most places in Turkmenistan I never did find out the name and my timeline on Google maps remains ignorant.

On then across the desert and we stopped at what appeared to be a ruined city with quite large tumbled down defensive walls. From the glossy “Welcome to Turkmenistan” pamphlet Vlad’ gave me I determined that I was at Abywerd but that was all until I spotted people digging so ambled over. They were archeologists and spoke some English inviting me to take a seat at their table and drink some tea. I determined that they were not only finding artifacts from the Seljuk Empire (9th – 12th Centuries CE) but also from the Parthian Empire (247BCE – 224CE). I found this to be really exciting as I have been reading about the history of these ancient civilizations and now I was actually at a place where they lived. I had a long revel about the Parthians defeating the Romans at the Battle of Carrhae in 53 BCE during which Crassus was killed leading, some say, to the death knell of the Republic.

On then, pounding through the Karakum towards Mary and the adjoining ruined city of Merv. Apart from the Door to Hell this was my main reason for coming to Turkmenistan as it is possibly the only major Silk Road city I haven’t visited, apart from those in Iran where I am a persona non gratis. At the height of its power it was the biggest city in the world (1200CE) due to its position at the meeting point of two of the major Silk Road routes. The city walls extended for five miles, in fact there were two walls, the inner and outer between which the caravans would leave their animals to graze. There are many descriptions of life in the city which featured more than ten libraries, bath houses, gardens, orchards and even an ice house where they stored snow from the winter. It was with some anticipation therefore that I produced my ticket at the entrance and drove into Merv the Great. Massive walls remain from the time that it was the capital of the Seljuk Empire and in places there are the remains of the Sassanid Empire (3rd – 7th Centuries CE). I could wax on about the history but instead will leave a link to a quite succinct article if you want to read more. The actual reality is somewhat underwhelming because there really is nothing left apart from the walls. Genghis Khan sacked the city (1221) in his usual style, slaughtering all the inhabitants and burning the city to the ground. That said it was an incredible feeling to just stand on the walls and just let my imagination run riot.

Sorry again, photos will not upload. Will try again next week from Tashkent.

Iranian border and patrol in background, railway line in foreground. 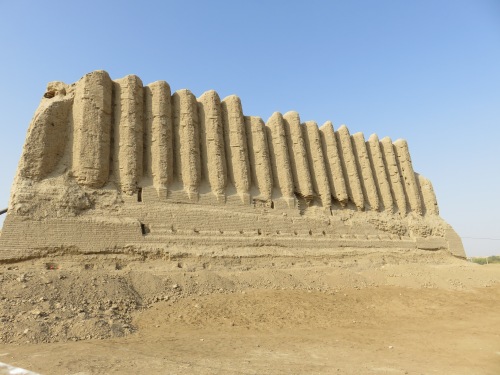 The walls of Merv.

On the walls of Merv. 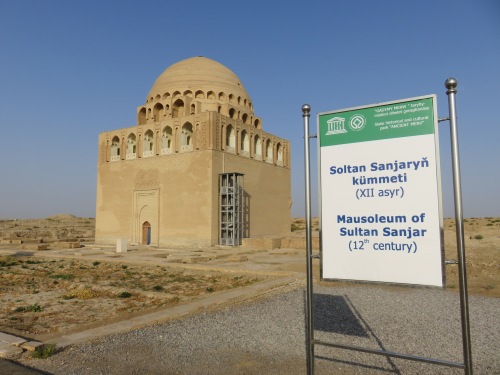 Mausoleum of Sultan Sanjar who ruled Merv at the height of its power.