If there was an element of controversy on the pros and cons of Jamaica then any comment I make about Israel is bound to stir things up. I apologize in advance. Lets see. I was in Athens after a great trip to historical sites and a quick bounce around a few islands and was casting about for a new destination before returning home. After checking the usual web sites for cheap deals I found an Athens to Tel Aviv flight for about $100 and it seemed too good to pass up. I checked with immediate family and they all approved and away I went. It was a remarkably quick flight with a transfer at Heraklion, Crete, and there I was at Ben Gurian airport outside Tel Aviv. As usual I had made a plan only a couple of days before and had decided to take the train from the airport up the coast to Acre, or Akko as it is known locally. Pick up bags from the carousel and change money, find a local SIM for my phone (both easy) and follow the signs for trains.

‘Shalom’ was the greeting at the ticket office ‘shalom’ I replied which seemed to go down well and after a minor discussion about whether I was going to Akko or Acre I headed down to the platform, ticket in hand, to wait the ten minutes before the train departed. The train came, I found a seat, I relaxed a bit as the first challenge had worked out ok and then looked around. It seemed I was surrounded with great big burly guys and pretty girls, all in uniform and all armed to the teeth. Enormous automatic weapons, Uzis I suppose, were everywhere. There was a young woman sitting across the aisle, regularly clad in jeans and a top, rocking out on her headphones, but with this enormous automatic weapon on her lap. Sometimes I am naively British but really, can you imagine this scenario on the 8.10 from Surbiton to Waterloo? There was enough firepower in my carriage to repel a small army and I suppose that is the point. Someone texted me that I was in a war zone with no war. Well that’s ok then, long may it continue that way.

Acre, or Akko, or even ancient (Antiochia) Ptolemais, goes back into history like Athens perhaps, Rome? Even before it became the major port for the Crusaders it was famed for its beauty, its Mosques, churches, walls and as a major trading post between East and West. There have been many famous sieges down the centuries, Richard the Lionhearted and Saladin (1191) for instance, or Sir Sydney Smith with the Ottomans and Napoleon (1799). The old town is quite small, I walked around the walls twice in one day, but is a veritable warren of tiny streets and narrow alleys. Apart from the walls a Crusader castle on top of a hill dominates the town. You may have heard of the Knights Templar who provided protection to pilgrims making their way from Acre to Jerusalem. The Acre castle was built and occupied by the Knights Hospitaller, who of course provided medical treatment in their hospital to arriving and departing pilgrims.

‘Enough history’ you might cry but honestly history was my main reason for visiting Israel. Perhaps one or two will follow up on these stories, there is a wealth of information available online. I did not go as a pilgrim even though the thrill of Jerusalem as a  Holy City for three major religions cannot be discounted but I wanted to see as many of the historical sites I have been hearing about since aged five at Sunday school. That is what I did and in retrospect I could have stayed there much, much longer, there is so much to see.

I’ll stop here as tales from Jerusalem, Bethlehem and Jericho, not to mention Masada, The Dead Sea and Eilat might be too much for one post. Be warned though, they are coming soon. 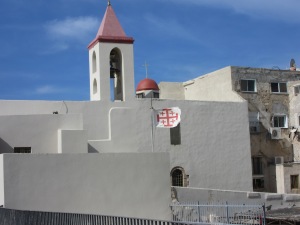 Saint John Church, Akko, with Crusader flag flying. I thought that was odd.

Poster outside a house to inform people that residents have performed Haj.
Pilgrimage to Mecca.

City walls from the sea, with fisherfolk.

The Crusader tunnel that runs from the port into the city. A bit spooky.

Below ground level the old rooms have been excavated. This is the dining hall for the knights.

A view through the walls giving you some idea how thick they are.
Blue sea beyond.