London to the Banda islands in one hop was really quite exhausting though I did have a couple of nights in Ambon waiting for the ferry across the Banda Sea which gave me a chance to catch up on my sleep a little. Ambon, is the major transportation hub for the Malukus which lie approximately between Sulawesi and Papua. Lots of boats and ferries stop here on their way to the outlying islands, planes call in here from all parts of Indonesia so it is relatively easy to get to, and leave. Banda on the other hand, is only serviced by the twice-weekly ferry, which leaves on Tuesdays and Saturdays, returning to Ambon on the subsequent days. There is a twice a month Pelni boat but the company, Pelni, don’t seem very forthcoming on the schedule. The story is that they say the ferry will leave at 9.00am but it actually leaves at 9.30am, this is so late comers can be accommodated. Be aware that both the port at Ambon and the one on Banda are hustler magnets, lots of people around to ‘help’, for a price, albeit a very low price. Helping me load and unload my bag cost about a dollar and this seemed to be generous.

Off we went, at 9.30 obviously, and I was able to make a video call, from the boat as we raced along, back home to California. I can’t remember what we talked about apart from marveling that we could actually do that, it really is miraculous. The signal faded and I glanced around to find two small hijabi clad children in the next seat. They played Angry Birds on my tablet and I thought back to the flight to Kochi where a similar thing happened. My economy class seat was just a little claustrophobic so I went up on the deck and enjoyed the open air for the rest of the six-hour crossing. Not much to see, just water, water everywhere but Banda soon heaved up on the horizon, dominated by its volcanic peak, Api, and we pulled into the harbor about two hours later. The lady who temporarily runs the hotel, Galuh, was there to meet me and off we set to the Maulana, a mere one hundred yards from the jetty.

Such a great hotel, built some years ago it still exudes Dutch colonialness though it has suffered a little over the years. The basics were all taken care of very efficiently, breakfast was always ready early, dinner was a veritable feast and the beer was cold. There is not a lot to do in the Banda islands, there are other little islands dotted around to visit including the famous Run, swapped with the Dutch for Manhattan, there is the volcano to climb, and there is an old Dutch fort to visit. The little town of Banda Neira is very relaxed and as always in that part of the world everyone says hello, as in ‘Hello Mister’. BUT, due to an altercation with the ATM machine at Ambon airport I didn’t have any cash, local cash that is. No trips for me! Accepting my cash deficiency I just stayed around the hotel, and let Banda come to me. I soon became a fixture in the garden and others would gather round and tell me of their diving expeditions, their hike up the volcano and their circumnavigation of the island in forty-five minutes.

How did you pay for the hotel you may ask? It took a while but the lady in charge and I signed up the hotel with a PayPal account and Julia, back in California, was kind enough to send photos of both sides of my reserve card before sending it by DHL to Makassar in Sulawesi. I did therefore have some form of ability to pay, just no cash!

There was a birthday, mine, and the hotel crew came through for me, cake, candles, Happy Birthday singing, it was all very delightful and reminiscent of two birthdays ago in Balikpapan on the island of Borneo. Very friendly and thoughtful people here.

The days came and went, ships came to the adjacent port to load and unload providing welcome diversions. Opulent liveaboard diving yachts passed through discharging their occupants under the water. One liveaboard captain proudly informed me that Tony Blair had been on his yacht, I can hear the Brits retching from here! Lady Diana Spencer once stayed at the hotel and drew a self-portrait which is kept in pride of place. Mr Jagger stayed there too as well as Jacques Cousteau. All in all Banda was everything I wanted it to be and the week or so relaxing there was the perfect antidote to the bad case of jet lag I suffered and I reveled in the remoteness.

Off I had to go, reluctantly to Makassar in Sulawesi to pick up my debit card. Without the ATM saga I could have stayed in the Banda islands indefinitely, but neither Fedex nor DHL service the smaller islands east of Sulawesi so that is where I had to go.

Banda Api, the volcano. I hear that it is about to erupt and people are being evacuated.

The ‘fast boat’ from Ambon to Banda.

Cleaning up the trash. 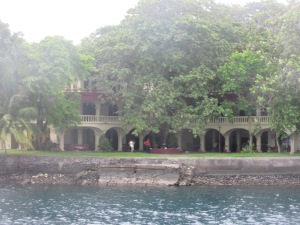 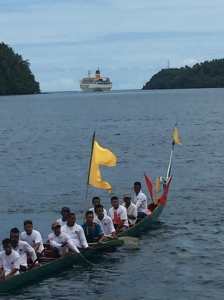 A big ship leaving through ‘The Gates of the Sun’

A Liveaboard. The si datu bua.