Ah Russia, Rossiya, Mother Russia has always been a dreamed of destination and the Trans Siberian Express a fantasy from long, long ago, provoked by all those Russian authors I read. For over two years I have toyed with the various web sites proclaiming how simple it is to organize your own trip, apply for the multiple visas required, book tickets, hotels, excursions and a myriad of other details. Unfortunately I have a somewhat limited attention span and this method just took too much time, far too much time. I applied to a travel agent who implied that for not much money they would organize everything. I filled in their form and the returned price was, for me, astronomical. Forget that then, fifteen thousand dollars to ride a train! You jest. But my luck changed and I came across an agency in East Anglia, UK, who seemed very sympathetic to my requirements and after multiple emails we established a very basic schedule that Odette, my new best friend, claimed would satisfy my adventurous spirit. (She had been reading my blog.)

Here I am then, one week and one thousand five hundred miles into the journey, in Yekaterinburg hard up against the Ural Mountains and it is absolutely stunning, Russia that is. I started out in Saint Petersburg for three nights, Moscow on an overnight train for another three nights and then another overnight train to here. It was all so new to me and there was so much that I wanted to see that I have barely touched the ground. In Saint Petersburg is Nevsky Prospekt; a famous street oozing with history and my hotel was half a block back from the thoroughfare, no street noise. I could have spent hours on Nevsky in one of the many tea shops people watching, in fact I probably did and any preconceptions I may have had vanished soon after my arrival. There were all sorts, punks, nerds, fashionistas, head bangers, 24 hour party people, skateboarders, hipsters, hippies, Moms arm in arm with daughters (lots of them), there was a Harley Davidson convention down the street so bikers from all over Europe were displaying their talents, loudly. I expected Ladas belching fumes but no, Audis, BMWs, Volkswagens, and all manner of modern cars. You see, it was just like any other major European city, London, Paris or Rome. My misconceptions, banished.

Top of the list in Petersburg is the Winter Place that contains the Hermitage museum. I headed straight for that and while I wasn’t disappointed there was a massive concert in the big square adjacent preventing me from taking a decent photo. No big deal, I took a few bad ones! There was Kazan Cathedral, the Church of the Savior on Spilled Blood (a memorial to Emperor Alexander 2, assassinated on that spot), St Isaac’s Cathedral, the Admiralty building, the Peterhof Palace, Peter and Paul Fortress, the Aurora warship, the Faberge museum and so much more that I didn’t see. I did take a cruise on the canal, I caught the buses and trolley cars, they have conductors who issue your ticket, I took the hydrofoil to the Peterhof and of course a taxi driver classically ripped me off. No more taxis, I’ll use Uber.

The night train to Moscow with three millennials in my sleeper cabin, pleasant but no English, a glass of wine and I slept all night waking up to Tchaikovsky’s Piano Concerto, well you have to don’t you. My hotel was three metro stops from the center and at first I just tried too hard to figure out how to use that fabulous system, but I soon worked it out and was soon changing routes with the best of them. My stop was Avtozavodskaya and soon the names of the stops were quite familiar, Kropotkinskaya and Tretyakovskaya etc. I found it very romantic but the nine million people who use it every day probably don’t agree with me. It is incredibly efficient, the trains come every two minutes, and it is very fast and very clean. Again I didn’t see everything in three days but spent much time at the Kremlin Fortress, the largest fortress in Europe, Lenin’s mausoleum, Saint Basil’s, Cathedral of Christ the Savior, the Karl Marx statue, the Bolshoi Theater, Red Square, GUM and the Pushkin Art Museum.

If there is a lesson to be learnt from this whirlwind tour it has to be don’t do what I did, three days is just not enough to do justice to either of those two cities and my only justification is that I have another two weeks and three thousand miles to go.

More from the train, The Trans Siberia Express.

An upside down wine glass on the roof of an apartment building.. The owner stopped drinking, business boomed! Good story.

There are still examples of Brutalist architecture in Moscow. Nice river views tho. 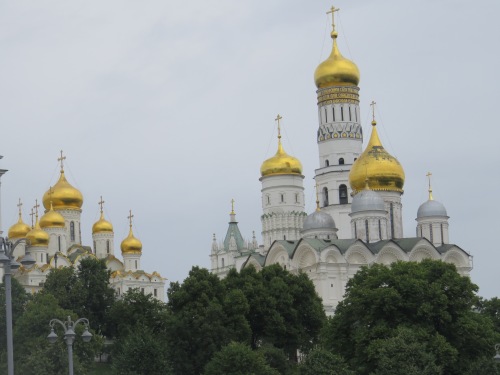 Is that Venice? No, Saint Petersburg. 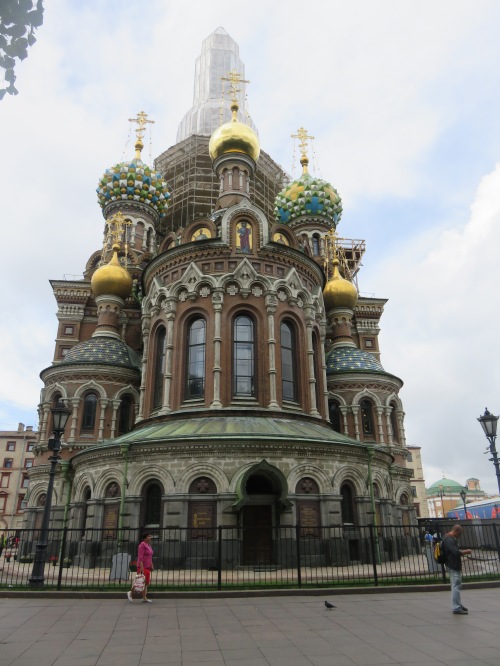 Church of the Savior, St Petersburg. 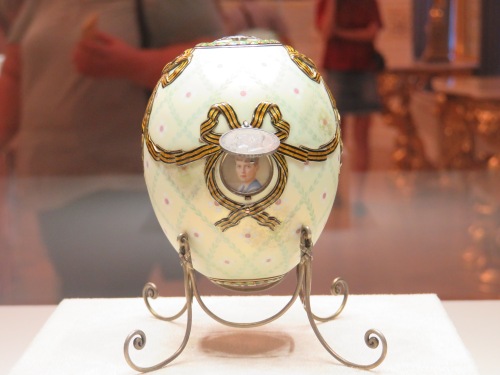 An expensive egg. By Faberge.