Xian and the Terracotta Warriors.

293km/h we are streaking across central China in one of those famous ultra fast trains. Pausing periodically at undistinguished towns and cities that all feature the same crane topped apartment blocks, building, building, building. There is widespread fog or mist on the land, the locals refer to it as haze, but I think it is just regular old smog. There was talk of a typhoon at the coast but I see little evidence of it blowing away the clouds and fumes. The whole landscape has a vaguely ghostly air about it, I cannot see very far so fields, villages, towns and cities, chimneys, factories and chemical works loom out of the murk and then are gone, in a flash.

We left Xian exactly at 11.00am, obviously, and I felt a bit of a twinge, the City had grown on me over the last few days. I was staying within the walls of the old city, seven kilometers around, and there was always a bustle going on. Buses loaded with commuters, streams of bicycles and scooters, happy walking shoppers, laughing students, the click clack of high heels and the clatter of suitcase wheels over concrete. The sidewalks were extremely wide, as not only did they serve the pedestrians but also doubled as parking areas for cars, vans and even buses. Eyes required in back of head! Earlier I had been met at the train station after a nine hour ride down the Yellow River Valley by Monica holding a sign with my name on it, that was a first. She and Mr Lee duly escorted me to my hotel with promises that I should see them again the next morning at 10.00am. Not an unreasonable hour I thought and agreed. Morning came and we piled into Mr Lee’s van and headed off to see the main attraction here in Xian, The Terracotta Army.

It is now Thursday and we were off to see the Eighth Wonder of the World on Monday and I am still not sure what to say about it. I have this trepidation, and maybe you do too, that when you have heard for years and years how wonderful something is, that when you approach it you get this feeling, well it can’t be that great. You have heard the story no doubt about the farmer in the mid 1970s who was digging a well on his land and found a cache of two thousand year old terracotta statues of soldiers, horses, chariots and the like. The archeological find of the Century, rivaling King Tutankhamen. The world went mad, foreigners, frowned upon by the Chinese Government of the day descended on Xian to see the phenomenon. The local population, lacking the funds, were indifferent.

All that has changed. The land of the well digging farmer (I shook his hand!) and that of his neighbors is now a vast tourist destination. People from all over China and the world now flock to the site, there are restaurants, cafes, an enormous ‘craft’ market, shops, parkland, cultivated orchards, public loos, the whole shebang. There I was with my trepidation and Monica, giving me the spiel. She was actually very good, very knowledgeable, personable and had a sense of humor so I felt a kind of relaxation as we approached the first site. Resembling an aircraft hanger, truly huge, we, the people were completely dwarfed. And there they were, in serried ranks, thousands and thousands of infantrymen, each face unique, based on the artist who created it, staring at me across two thousand years. My jaw did drop. A long way. I couldn’t speak. I couldn’t move. There was no getting away from it, this is not a place for cynics, trepidation, or even flippancy. The speed tours raced past led by their flag waving guides but Monica was content to let me just stop and stare, wonder and think, contemplate and reflect. It was the kind of experience that brings one down to earth with a distinct THUMP.

Next Beijing. I wonder if the smog is as bad as the media suggests…….. It is!

The famous view that you see when you first walk in. 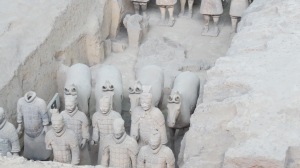 I really liked the horses. 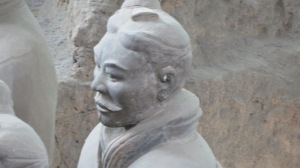 I may have just passed this guy in the street!

The most famous one.