To Cambodia we go, me and all the other holiday-makers from all round the World. So many different languages in the departure lounge at Luang Prabang it was a veritable Tower of Babel. Now we are on a prop plane 20,000 feet over the border with about thirty minutes to go.
I took the opportunity to revisit the alms giving/receiving ceremony at dawn this morning and discovered the cunning plan behind the chaos I beheld that first morning. Now that I know my way around town better I got off the bus at an earlier point than previously and cut down the back alleys to a street that parallels the great seething mass. Ha ha, local residents lined the sidewalk complete with rice baskets, ready for the procession and not a camera in sight. This then is the secret, avoid the chaos on Sisavangvong Road, this is presumably where the City Fathers want the cameras to go, and go one street over, towards the Mekong. You will have the street to yourself, well apart from the residents and the monks. I hope some photos come out (do we still say that?) as the sight of that Saffron ribbon heading down the street, unhindered, was mesmerizing.
Onward to Siem Reap, the gateway to the largest religious building in the World, Angkor Wat. I was greeted on arrival at the airport by the hotel’s tuk tuk driver and we headed off on the 7 km drive into town. First impressions, it’s hot, it’s wet, it’s dusty, it’s noisy, it bustles, there is food, everywhere, it is amazingly inexpensive, it looks like it just fell down and is being rebuilt. I absolutely love it. Oh,and holiday makers sitting with their feet in fish tanks! 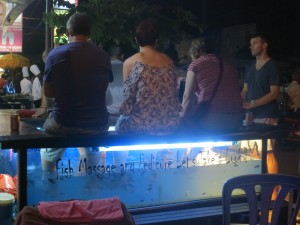 This seems to be the thing to do, a fish pedicure.

A fish pedicure. A tuk tuk ride from the hotel to the restaurant area is a dollar, after which you would be hard pressed to spend more than ten dollars for a meal. There is great shopping, I saw some very attractive silk pashminas. I want a hat and a bag to carry stuff around, like a shopping bag. So back to the market after completing this.
Up again before dawn tomorrow and spend the day with a tuk tuk driver and a guide book. See the sun come up, walk about, take photos, hope to understand why the complex was built and how it has survived all these centuries. It is the chronological twin of Chartres, Winchester, and other European cathedrals.
Sorry if I sounded a bit blue last evening but it was Valentine’s day and I had hardly spoke to a soul all day.
Better now.
Thanks.

7 responses to “Arrival in Siem Reap”