Ok, I finally succumbed, stopping at the two hundred kms marker to take a photo, three tiny children sidled up and began cooing, rupees, chocolate. There we were, absolutely in the middle of nowhere, crazy Westerner is taking photos of a mile marker, I just had to, yes, I gave them money. Everywhere, absolutely everywhere you are told not to, it’s bad for them, it’s not PC, they will not go to school and instead end up hustling for chocolate and rupees at the mile marker. Well, I haven’t seen a building for an hour, well not one that you could call a house, so the chances of those little ones ever going to school is remote. Do I feel bad ? Yes of course I feel bad, for them, and a system that lets me ride around in a car, with a driver, and gives them nothing whatsoever. Oh the life of a bleeding heart, tree hugging, pinko liberal. Desperately searching for a reason to go on living I will say I raised big smiles on the faces of three children who live close to the two hundred km marker from Jaisalmer and maybe tonight they will be able to tell funny stories about the Westerner who took photos of mile marker.
Last night’s hotel was a great success, I had a quick walk around the closed fort, looked in some shops, failed to find the craft market, had dinner and went to bed. At about four thirty I discovered the disadvantage of staying in a room on the top floor, it was just about adjacent to the towers of the Buddhist Temples of the city, consequently, when the amplified prayers began I almost fell out of bed. I don’t wish to sound disrespectful, it was very melodic, it’s just there were three temples in my immediate vicinity and others in the distance and they were not, shall we say, in sync. The prayers went on for about an hour and then the calls to prayer from the towers of the Mosques started. It was not exactly a restful night.
Undeterred, I was up early, grabbed a handful of breakfast and off on the high road through the desert to Jaisalmer. It is not quite like the archetypal desert, yet, it is sandy, yes, but trees manage to grow, goat herds survive, there are buffalo, cows and bullocks of course, camels and donkeys, and the occasional village. Desert colored, a bit drab to my eyes, dusty and isolated there is something remarkable to see in each and every one. The women ! Well their clothes anyway, you cannot see any part of them, they are so heavily covered and veiled, it’s the colors, the colours. Every color of the rainbow, and a few more besides, no two can possibly be alike, or even similar. Bright blues, yellows, pinks, turquoise, purples, orange, they stand out like beacons of light against the harshness.
It’s odd you know, every time I see Rajasthan written on the side of a truck I say to myself, oh yes, right, Rajasthan, but even now I still half expect to see an Attenborough pop out from behind a tree, microphone in hand, proving that this is in fact a movie. There is another thing, Pakistan is just a few miles away. I received some concerned comments about the proximity of the border but I have to say we are in good hands. We have just passed through a tank convoy, seen the Border Guard HQ and a massive camouflaged encampment. Santosh also just commented that we are passing through an old nuclear testing ground. I am sure everything will be alright even if India did beat Pakistan in the cricket last night. We just passed a large number of anti aircraft guns lined up alongside the road, seemingly ready for action.
One more thing, there was a sign inside the gate at the Bikaner hotel that read “Please do not ask for a commission”,puzzled I asked Santosh what it meant. He shrugged and feigned ignorance or lack of understanding. We stopped for lunch at a nasty place aimed solely at Western tourists,mine was so revolting I refused to eat it, how can a vegi samosa be disgusting! The daal and rice was ok, but to serve samosas with ketchup, in India, really people. The point of the story: I remarked to Santosh that my lunch was inedible, and he said, I know, then looked very sheepish and started talking very fast about something else, incomprehensibly. The penny dropped, he rakes in a percentage of everything I spend, hence my lunch at the most expensive caff in the whole Thar Desert. What a hick I am, I won’t even start on the story about his friend who wanted us to come for tea, who just happened to own a silversmith shop. I just maintained my happy smiley face, but how many no thank yous do I need to say before I make my point.
On to Jaisalmer, what a treat for the senses, the fort, containing the old town completely, dominates the surrounding plain, it burst into view ten kms out and is everything I could have imagined, maybe more so, it dwarfs last night’s fort in Bikaner. Fabulous sandstone walls, some crenellations, turrets, Havelis, little decks, verandas and terraces, some falling down bits and of course the occasional a/c unit and satellite dish. My hotel, for two nights, is ok thanks, my room faces the fort, it has a rooftop bar, restaurant, hangout space gaily done out in multi colored covered lounging big benches, more like beds in fact. It has the wifi. It has the chill techno music. It doesn’t appear to have any people. The walls of the fort soar up in front and the desert stretches out infinitely behind.
I am here, I made it, my ultimate Rajasthan fantasy come true and it’s better than I ever could have envisioned.
Thanks. 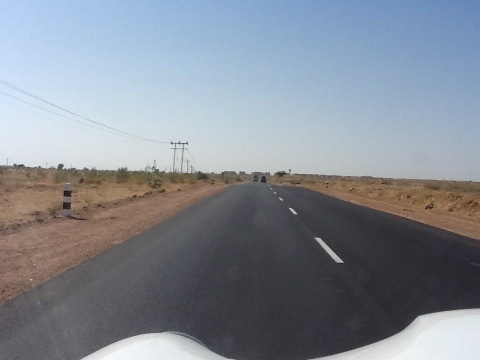 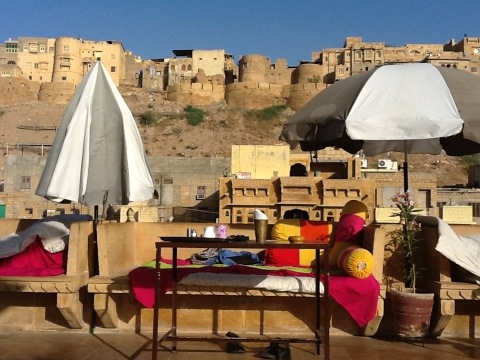 My spot on the roof. 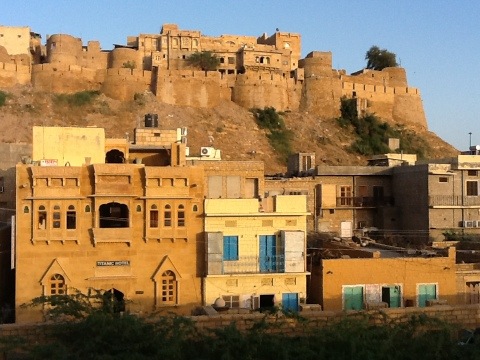 The right end of the fort. 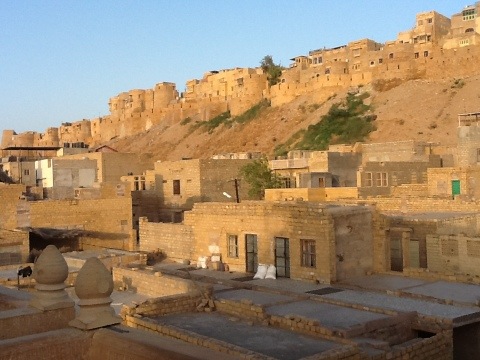 The left end. There is a bit in the middle which you can see behind “my spot”. 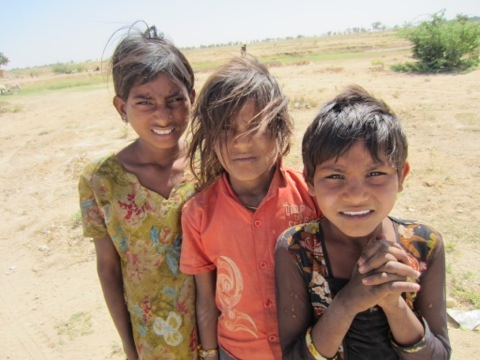 The Three Little Ones. 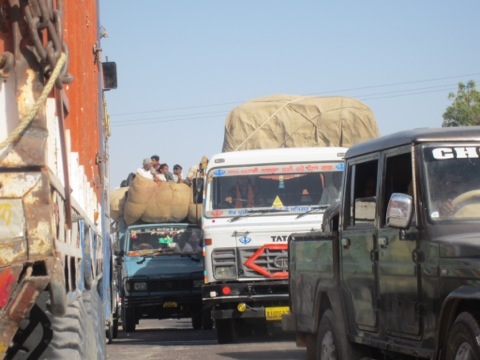 The road was quite crowded sometimes. 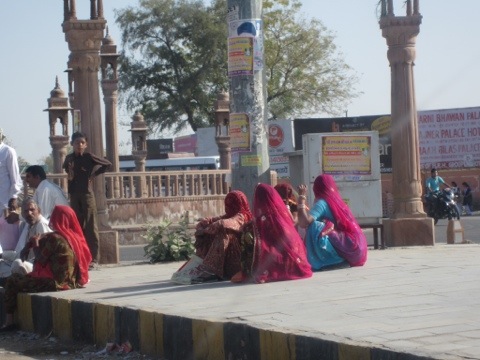