Described in the books as an oasis town on the edge of the Gobi Desert I would have to disagree. Town, perhaps it was, but now there are massive developments being built on the outskirts transforming it into quite a large city. All the new apartment block have solar panels on their roofs, interesting. Last night I wandered about and took a look. Right outside my hotel there is a boating lake, with boats, so I strolled around that along with other inhabitants. There were students reading, Moms with babies, Grandparents with kids feeding the fish, there was a stage setup for the Regional Singing and Dancing Competition, restaurants and bars, some shops and many elderly gentlemen with nets on long poles, pulling garbage out of the water, good for them. I went in search of the legendary John’s Cafe, walked miles, failed, returned to hotel for dinner which was not great and went to bed.

Uo early this morning to go on my tour. I’m not really a tour type person but I can’t figure out a way to persuade a taxi driver to drive me thirty odd miles to see one thing, then another thirty to see something else, so a tour it had to be. Anna, my guide, was very pleasant though a little severe and my driver was the cautious type, all good I suppose. Off we went down the aforementioned expressway and after the thirty miles turned off onto a single lane road and climbed out of the greenery of the oasis into…The Gobi Desert. How about that, I got really rather excited, many pauses  for photos. We followed the base of Flaming Mountain for a while, it’s 75 miles long and part of the Tien Shan Range (wasn’t I just in that Range in Kyrgyzstan?) until we came to the Bezeklik Thousand Buddha Caves. These are set high on the cliffs above a verdant river valley and were occupied by Buddhist monks in the 5th to 14th centuries. A very tranquil and idyllic place and perfect for meditating, I’m sure. The monks decorated their caves with paintings and murals and the cave ceilings feature many, if not hundreds, of images of the Buddha. Unfortunately the Europeans came along in the late Nineteenth Century and removed the murals from the walls, packed them off to Europe where they were subsequently destroyed.

Back down from the desert we headed for a an explanation of the Karez. Fear not, I had never heard this word before either. The ancient inhabitants worked out that they could extend the oasis in which they dwelt by drilling wells into the underground water that they discovered about 30 odd feet beneath them that flowed down from the Tien Shan and Flaming mountains. So they did, they drilled hundreds if not thousands of wells. Then someone suggested, back in 206 BC during the Han Dynasty, that it might be a great idea to join up the wells, thirty feet down and create a kind of underground river, thereby avoiding evaporation and using the natural gradient to assist the water to flow. Turpan flourished becoming a major junction of the Silk Road where caravans could rest, feed their herds and pay taxes. Brilliant! Not only that but the Karez is still in use today, there are 3,100 miles of underground channels irrigating the widespread vineyards and other crops. This in an area with an annual rainfall of .32 of an inch.

On then to the ruined city of Jiaohe which provided protection to the Silk Road caravans. Built on an island where a river splits and then rejoins it is perfectly defensible, it  has no city walls instead relying on the river cliffs which are over one hundred feet high. There is not much left of this city dating from 108 BC as you might imagine. It was finally abandoned in the 13th century after being sacked by Genghis Khan. I spent over two hours there, much to the amusement of Anna, looking around and imagining how it must have been all that time ago for the seven thousand inhabitants. I hope some of the photos are worth looking at, lets see. 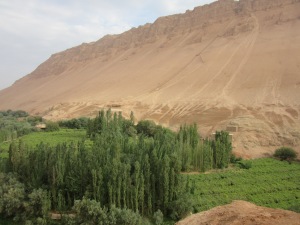 Some of the Thousand Buddha Caves.

This was a big City. 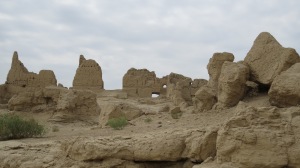