I rode a camel! A quite respectable beast, it didn’t spit at me or even attempt to bite me. It’s two humps were comfortable to lodge between, it was an almost relaxing ride. Terror of course as it lurched perilously close to a sheer drop of two hundred feet but it was only sand so I figured it might be a soft landing. The point of the camel ride was somewhat elusive, I thought I was riding up, and up, the massive sand dune to gain an aerial view of the famous Crescent Lake far below. But no sooner had we reached the Dune’s summit where the view might have been possible we, the camel and I, turned around and headed down again. Wretched thing. All was not entirely lost however, we came to the camel turnaround where I genteelly alighted after the massive lurch of the camel kneeling and set off down the path in search of the elusive lake. I found it. It has survived the ravages of the desert for hundreds of years due to its unique position amongst the massive dunes which apparently flow round it with the prevailing winds, rather than over it. It is fed by a spring. At lake level it was quite pretty but for the full “wow” factor it was clear that I would have to climb one of the aforementioned massive dunes and take in the whole scene. Hyperbole you might think it is but when I say massive these dunes were huge, enormous, gigantic, and of course, they were made of sand. Not easy climbing. I sat at the bottom of one dune and contemplated my fate. Others were climbing but they appeared to be students, vacationing, and out for a lark. I didn’t notice anyone like me, I mean not only in accumulation of years but also home base. Nobody from the West at all, not one. Come on me, don’t let the side down, we can show ’em, so off I went, UP. There were short poles on the surface joined together with rope which did actually make some sort of purchase for my shoes and at least prevented me sinking into the sand up to my knees. Steep though, very steep, almost vertical and I soon had to stop. As did the little group I found myself leading. We sat in a huddle gasping, smiling and gazing upward, can we do this? Onward with cries of Let’s Go, and on we went. I think they were mimicking me, not sure, but we ascended and our group grew. Another rest, more smiling and gazing upward, I began to feel a bit Forrest Gumpish. It took two more rests to reach the summit, we all made it and yes, the view was spectacular, well worth the climb. A sort of international camaraderie developed in the group and we all took photos of each other as well as the Lake far far below. The people looked like ants down there and we all sat around in the sand watching the crazy sledders careening down the slope, the ultra lights circling overhead,  the rich people in their choppers and the ever changing shadows on the dunes as the sun set. I have been fortunate to see a few beautiful lakes about the place, Maggiore, Tahoe,  Lomond, Como, Windemere, Ness, Neagh, Superior even, and the like, but this was unique. It was like a painting that constantly changed. I was transfixed and took far too many photographs.

We all sat there until almost dusk, more people came up, gasping, sweating but laughing as they reached the top. At the market in the parking lot brightly colored scarves were sold and, purchased by the ladies to keep the sand out of their hair, eyes and ears they all made a colorful show. Off road vehicles appeared to ferry the sledders down, I was really tempted to offer money for a ride back down. That was a concern, discussed with enormous difficulty, how do we get back down! We can’t possibly follow the short poles back down, it would take forever and be way too difficult. People were actually doing it, awkwardly and dangerously, there were frequent and inelegant sprawls. Casting around for a solution I came across an early experience in the Scottish Hills with my sister, scree jumping. It can’t be that much different. Shoes off I tried it. It worked. So we set off, leaping and bounding, leaning backwards in case of falls, and running so we didn’t sink into the sand. It was hilarious. People clapped. So much fun.

Looks like I have used up all your time so I’ll stop now. Hopefully there will be an opportunity to tell you some of the other delights of Dunhuang in another post. This train ride has mostly been across the desert tho which one is a bit of a mystery.  Some guide books suggest it is one of the Gobis, yes, there is more than one, the Greater and the Smaller. Others say it is the Taklamakan, the largest in China. I don’t know, but a desert it is. For over an hour we passed through a wind farm, an hour. That suggests that it was some sixty miles long and I have no idea how wide, the windmills stretched to the horizon and out of sight. Maybe someone read the memo about pollution and coal fired power stations. 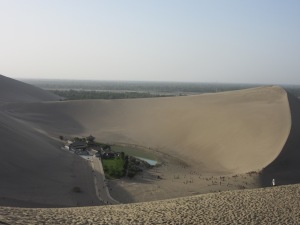 I know this “thumbnail” looks a bit dark. If you right click it (Windows) or Control click (Mac) you should be able to view in full screen.
Quite a pretty vista. 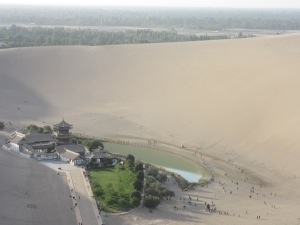 A close up, but I think it is better with the jaw dropping background. 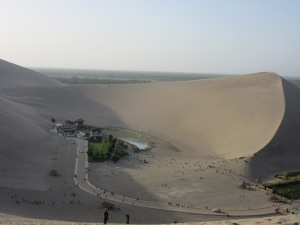 In the foreground is the lip of the dune I climbed. 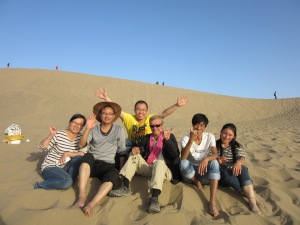 Part of the merry band! 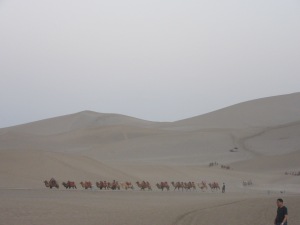 I liked this one though it was nearly dark by then. 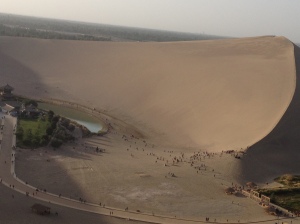 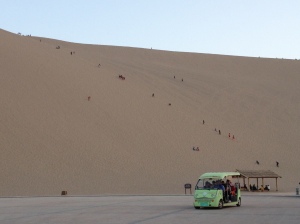 That was ‘my dune’. You can see the route. 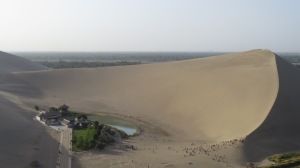 A photo from a rest stop. 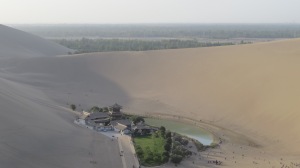 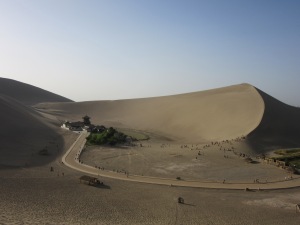 Early on the climb. 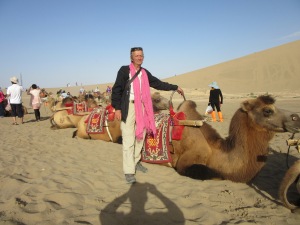 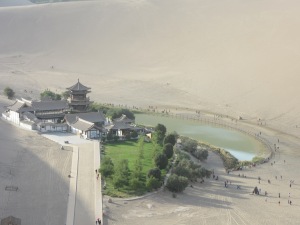 This entry was posted in Uncategorized and tagged Crescent Lake, Dunhuang, Yueyaquan. Bookmark the permalink.